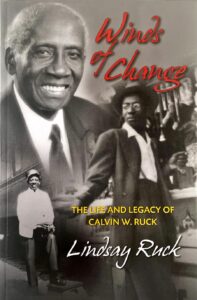 Winds of Change: The Life and Legacy of Calvin W. Ruck

Calvin Woodrow Ruck, born in Sydney, Nova Scotia, to Bajan immigrants, saw roadblocks not as barriers, but as hurdles that he would eventually leap over.

From working in the steel plant and as a sleeping car porter to being awarded the Order of Canada and appointed to the Senate of Canada, Calvin worked diligently to ensure that his children, and his children’s children, wouldn’t have to go through the same things he went through. Although he was turned away from many opportunities, he was determined to provide for his family and took on a heavy workload in the Halifax community.

While Calvin lived in Dartmouth, Nova Scotia, the areas of North and East Preston, Lake Loon and Cherrybrook held a special place in his heart. Through his work as a social development officer and as someone who was the leading voice of many equality issues, Calvin’s name became very familiar to the people of Nova Scotia. But his upfront opinions also brought adversaries, leading to hate mail and threatening phone calls from those who were opposed to any improvements for the minority race. Despite the consequences, Calvin wanted to ensure that people of all races had as many opportunities as possible. His efforts were the beginning of a major movement for Black employment in the Nova Scotian community.

This story is thought-provoking, inspirational and heartbreaking. It offers hope to those who may feel like there’s no way out and challenges those who are comfortable with the status quo. As Calvin demonstrated, things don’t always have to stay the same and no one, regardless of race, must ever be denied their human rights. Through his tireless efforts, dedication and sacrifice, he initiated a significant racial and social transformation in Nova Scotia and, as part of his legacy, the winds of change continue to blow across the province and the nation.